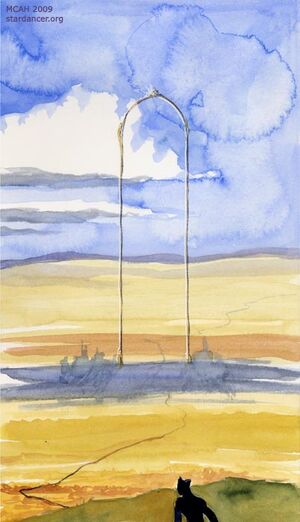 Information goes here about the Ai-Naidari World Gates, including how many there are, what worlds you can get to via them, their size, their materials, and other things like the gate-winds, and the growth of the gate complexes around them.

Ajan's singing brought us to the Gate-complex, then. Qenain's Gate-house was one of many there, for the volume of the commerce traveling through the Gate made warehouses at the site an economic necessity. Perhaps if there were more of them it would be different, but the Gates are not numerous: there is some relationship I do not understand between their size and the distance they cover, and Gates large enough to bridge the distance between worlds are enormous, their spars easily towering above the clouds. I cannot even fathom how they are erected, for the world Gates were created long before I was born.

You may fear, perhaps, that we have lost the expertise, aunera. But Thirukedi would never allow such knowledge to be lost. The theories behind the Gates are forever preserved, and so long as the theory is known it is only a matter of time before the engineering is possible, even if the engineering is forgotten in the between times.

The Gate was visible long before we arrived, then. The Gate, in fact, is visible from the capital, if the weather is clear. But the closer one draws to it, the more astonishing it is. The arch's feet are the size of an entire district, each one: imagine walking several blocks before reaching the end of one of those vast pylons! And from each of these feet, the arch rises and is lost to the blue haze of the air. So pervasive are these monuments that the Gate-complex has its own sayings: 'Weather comes and goes, but there the Gate,' is common—an expression urging patience—as is 'Even if you can't see it, the Gate's still there,' a frank reminder of the persistence of reality.

Really, the cluster of buildings at the base of the Gate is not memorable, in compare. Its only unique feature is that it only extends toward the capital, and the Gate itself cuts the complex off as sharply as any blade; there is something about the space behind a Gate that makes it uncomfortable to use, and so we do not. There is room enough on the worlds for such eccentricities.

Retrieved from "https://mcah.fandom.com/wiki/Ai-Naidari_World_Gates?oldid=8029"
Community content is available under CC-BY-SA unless otherwise noted.