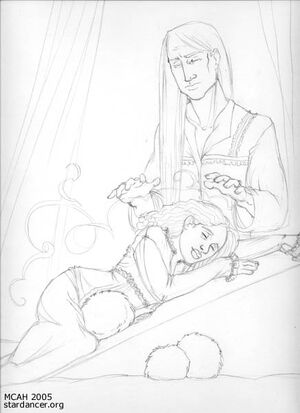 They are in some ways the most alien of all the aliens in the Peltedverse: quasi-vegetal creatures that bud to reproduce, eat via photosynthesis, communicate via neural 'fur,' and roll around in clods that hook together to share thoughts, such as Flitzbe have thoughts. More than one character has wondered what the Flitzbe derive from their participation in the Alliance. Sometimes things can't be easily explained, though.

The most famous Flitzbe in canon is, of course, Allacazam, from the Her Instruments series, though several unnamed Flitzbe make appearances elsewhere, like in the Alysha novella "Who is Willing."

They can change fur colors depending upon their mood, or that of someone holding them:

It was a tender hold, and in it Allacazam blossomed all sorts of calming colors. Pastel purple. Shimmery silver. Touches of rose and peach and blue.

She petted Allacazam's fur and the Flitzbe wiggled beneath her brown-and-pink fingers before turning a soothing dark blue.

The Flitzbe's sending transformed into a muted wash of silver and the sound and smell of rain. She took that for resigned agreement and petted his wiggling neural fur.

Allacazam painted a sparkling orange and gold amusement at the thought. "Nah, I don't think so either. Should we look?"

"I guess that's a no," Reese said. "Ah well. We might as well deposit it in his room. You just roll along with me, okay?" The Flitzbe turned pink and she set him down before turning to the luggage.

Reese collapsed with her back to the wall and panted as Allacazam rolled in between her legs and bumped up against her stomach. The Flitzbe was bright orange with alarm.

Beneath his hands the Flitzbe turned a deep, contented purple-blue, and those long white fingers sprang into sharp relief.

The Flitzbe rolled over it and nestled against Hirianthial's ribcage, tucked against the armpit like a second heart. The Flitzbe's colors flared through orange and yellow to a dull, ugly maroon.

"What does that mean?" Irine whispered.

...Her eyes opened and settled on Hirianthial, saw a gaping wound the size of her joined hands over his breastbone pulsing the same dull maroon as Allacazam's fur. She snatched her hand back.

He closed his eye and at his side Allacazam's colors flowed to a muted, pulsing blue. Warmth and pleasure radiated up her arm from the hand that still rested on the Flitzbe's body.

Retrieved from "https://mcah.fandom.com/wiki/Flitzbe?oldid=8043"
Community content is available under CC-BY-SA unless otherwise noted.