An article about the Harat-Shar.

The Harat-Shar are polygamous with zenana (harems) of females per individual male - perhaps because fewer males are born? Clarification of this societal development needed. Before marriage, they are polyamorous, have no incest taboo, and are attracted to either sex and individuals of most races.

The Harat-Shar have a very complex pagan-style religion that is paired with a frowned upon (but surprisingly popular) pacific religion. The oldest religion, which is also theonly one recognized by the state, is that of the worship of the Hierarchy, called so because there is a Hierarchy of angels beneath a greater God who is called the Arbitor. The Arbitor is never called upon or directly worshipped, as it is believed he/she is too far above the common mortal folk to look upon them. Rather it is the Angels who interact with their Prides. In appearance, angels are gryphons, as Harat-Shar consider them to be the ultimate fighters, flyers with raptor beaks and the claws of cats. Angels are divided into two sets: Angels and Inverse Angels. Each angel has its inverse (usually in coloration only). Angels are constantly battling their inverses, who represent all the bad traits that can be had in a personality. Each Angel is the patron of a certain segment of the population, called their Pride, after the grouping of lions. There are separate Angels for females and for males, and separate angels for digitigrade/plantigrade and the cat types. Thus, one of the common angels is Natakarenza, the patron Angel of female digitigrade jaguars. Every female digitigrade jaguar in the race is part of her Pride. It is believed that as long as there are female digitigrade jaguars, Natakarenza will exist...and if Natakarenza falls in the eternal battle on the First Plain of Reeds, then all the female digitigrade jaguars will cease to exist. Also, it is believed that Natakarenza's personality traits will be reflected in all of her Pride. The inverse of Natakarenza, Cerialeiza, represents the bad or undesirable traits of Natakarenza's Pride, thusly when a female digitigrade jaguar displays cowardice, it is said that Cerialeiza is within her, or walks beside her. It is also believed that every battle that a female digitigrade jaguar wins will strengthen Natakarenza in her battle against Cerialeiza.

These angels are always drawn in a very stylized manner. It is common to have them prominently painted in a very generic pose in the front hall, and to have them painted in a pose special to the family in the more private rooms. Statues are only commissioned for the temples. Temples are divided into two types; a temple for the male Angels, and one for the Female. Priests must be of the sex specific to the temple to make offerings and hold services.

The Harat-Shar also have a Christ equivalent. Followers of this religion believe that there once was a battle so harsh that the Inverse Angels had captured all of the Angels save one and were threatening to destroy them, and thus eradicate all the Harat-Shar in existence. The only Angel uncaptured was the Angel of male plantigrade lions, Kajentarel, who was also their war leader. Kajentarel, of all the Angels, was the most thoughtful, the most far-seeing. He called his Inverse, Irenlateiyar to parley. The story goes thusly: that Kajentarel offered to Irenlateiyar himself for what his Inverse would decide was the ultimate punishment in ransom for his people. His only condition would be that he would not die, nor would any of his people. Irenlateiyar agreed and set free the Angels, then took Kajentarel. For three days he deliberated on what would be the ultimate punishment. Finally, he decided and set Kajentarel down to Harat-Sharii as a blind, mute, deaf, impotent, clawless and toothless Harat-Shar, to live out his days there and die as an outcasted mortal (in those days, crippled beings were shunned and beaten and made fun of).

After the first twenty years of his mortal life and numerous beatings, Kajentarel was taken in by a kindly elderly warrior male and his two wives, primary and secondary. They were ocelots, one of the lowest types on the Hierarchy. When the old man was called to war and slain, leaving wives and children bereft, Kajentarel began to realized the folly of war. He began to preach, though stories he wrote of peace. The Harat-Shar of that time were not ready for such teachings however, though Kajentarel had gained a strong following. The leaders of the time captured him and ritually tortured and executed him on the terrat. Entombed, the site was visited by the wives of the ocelot and their children, who sat at the door of the tomb and sobbed for five days straight. On the dawn of the sixth day, Kajentarel emerged, reborn as his immortal gryphon self having finished taking the ransom for his Angels, much to the astonishment and awe and overwroughtness of the two wives and the children. He explained to them what had occurred, revived the old ocelot male from the dead, and admonished them to spread the teachings of peace, that he would guide them. The stories that Kajentarel wrote as a mortal formed the 'First Cant' of the Book of Tales (the Bible of the Pacificists). What the two wives (Serala, Meria), the old man (Serii), and their eldest son (Leon) wrote about Kajentarel as a mortal and as an immortal became the 'Second Cant'. This is the Bible of the pacifists, also called the Seriians, after Serii, who was risen from the dead. The 'cross' of the Serjiia is the terrat on which Kajentarel was killed. It is shaped like a multiplication sign with two spikes between the yars (the arms of the 'Y').

There are frequent stories about Kajentarel and those he aided after he rose from the dead. One of the more famous involves the young cheetahine Narya, the lowliest and most frequently beaten wife of a wealthy merchant. She often prayed for peace and one day found a beggar in the street. Risking the wrath of her lord, she hid him and fed him until his coat regained its shine. Only then did Kajentarel reveal herself to him, having been in the body of the beggar, and take her with him to the home of the Angels on the mount. There are varying tales on what happened to Narya after going there; some say she became the concubine of the Angel, others say his housekeeper, still others the Healer after the battles. Some say she became a fountain of marble, giving forth waters to those who thirst that sate them forever.

The seat of the soul in the body of a Harat-Shar is considered to be in the pelvis.

One of the earliest folk tales tells how each Angel came to have his or her coat pattern. In the early days, the Inverse Angels were black and the Angels tawny uniformly. It is said that one day the Inverse Angels called for peace. To commemorate this peace, they offered to hold a party. The Angels, much bemused, agreed. In those days, it was a custom to paint oneself when one was victorious or glad; the Inverse Angels provided the paint at the celebration, a special paint that would not come off, so that they could be more easily identified. Each Angel, unawares, painted him or herself with the preferred victory markings and mingled among the Inverse Angels. After the party, they returned to their home and to the Baths of the moon, only to find the paint would not come off! Angered, they planned their own party for the Inverse Angels and laced the water and food with a drug. While all the Inverse Angels were sleeping, the Angels painted them with the patterns and colors they had used, but the opposite, each Angel singling out a specific Inverse Angel on which to wreak their revenge. When the Inverse Angels awoke, they were startled and fiercely angry, and instantly an animosity for their opposites began to burn in their nariilas (the pelvis hollow where the soul is supposedly seated). From that day forth, the Inverse Angels found specific Angels to war against, and from that day forth, all the Prides of each Angel wore his/her victory pattern.

The Harat-Shar are one of the few Pelted races to have a system defense force supplied and administrated locally (as opposed to having the system defense managed by Fleet auxiliaries).

Tigraine Sascha and Irine from the Earthrise 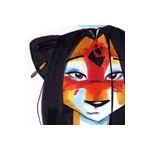 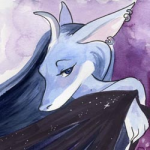 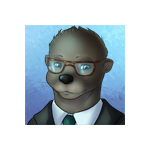